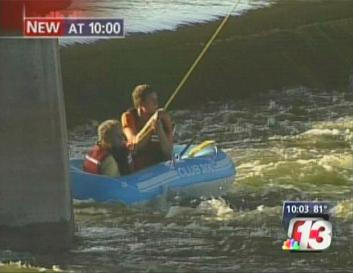 On July 8, 2007, Joseph Wanek and Rachel Treptow set out on an ill-prepared river excursion that nearly claimed their lives at the deadly Scott Street Dam in Des Moines. Miraculously Joseph and Rachael survived the encounter. IWC invited Joseph to submit an article describing the event. This is his account. 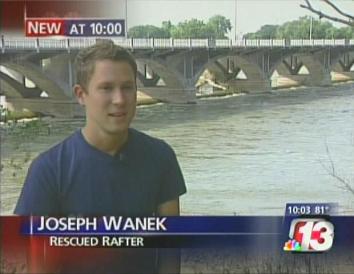 Low-head dams create a re-circulating underwater current, able to suck a person down and drown them. This might seem obvious to some people, but we had no idea these dams could be so deadly.

I have always had a hunger for adventure, so during the summer of 2007, I decided to buy a cheap inflatable boat with the capacity of about two people. My friends and I went on three different trips down the Raccoon River. The first two river adventures were really amazing to us because it was a part of Des Moines we had never fully experienced. However, the third trip left us with an experience we will never forget.

My friend Rachel and I began our rafting excursion on the Raccoon River near Gray's Lake. The river seemed calm enough, so we didn't wear any life jackets. We also don't own any, so we didn't go out of our way to get some.

For about half an hour, the boat floated downstream at a sluggish pace until we came to the convergence of the Raccoon and the Des Moines Rivers, right by Principal Park.

As we approached, we noticed orange signs far up ahead. At first, I thought it was a construction sign that had fallen off the bridge and gotten stuck. As we drew closer, we noticed the sign said "DAM." We could hear some falling water, so we decided to stop the boat and check it out. I climbed some stairs on the riverbank to get a better view of the dam. This point of view wasn't much better than what we could see from the boat. It looked like there was maybe a small drop where the dam was located, but it was hard to tell. We could see fishermen standing in the river about 100 feet downstream beyond the dam, so we figured there was no real danger.

Back in the boat, we decided to go forward. We thought the worst thing that could happen was that we might tip over and get wet, but we figured we could just get back in and continue on our way if that were to happen.

Since we weren't sure what the dam looked like, we paddled toward a pile of branches so we could grab onto them if we needed to stop. As we got closer, the sound of falling water intensified. We soon grew very nervous and decided to paddle to the side of the river.

It was too late. The dam started pulling us closer and we were backward, trying to paddle in the opposite direction. Rachel yelled, "I can't go over backward, I'll fall out!" We quickly turned the boat around to face forward, just as we were about 5 feet away from the dam.

With a forceful slam, our inflatable boat dropped about three feet, pushing the front of the boat underwater for a second. The boat was still floating, but had filled with about six inches of water.

We quickly started paddling forward, but to our surprise, we couldn't get away from the dam. The swirling current below was pushing us back toward the falling water. We didn't know what to do, except paddle. We were up on our knees, exerting all of our energy to get beyond the backwash current. We paddled next to the support column that holds up the bridge. I tried grabbing onto the edge, only to discover there was nowhere to grab. We even tried grasping the imperfections in the cement support with our fingertips. We could do nothing to help ourselves.

During the approximately 30 minutes that we spent paddling, we noticed commotion from the group of fishermen standing beyond the dam. We then saw a police officer standing on the riverbank and we knew we were in trouble.

Since we still didn't realize how deadly the situation was, it crossed our minds to jump out of the boat and try to swim beyond the dam. However, we made the right decision by staying in the boat.

Finally, after what seemed like forever, the fire department's Water Emergency Team came to our rescue. They threw a rope down from the bridge above us. Rachel and I quickly brought the rope into our boat. Moments later, two life jackets were lowered down. In the meantime, a rescue boat came from downstream and waited a few hundred feet away. Then, the other end of the rope we were holding was thrown out toward the rescue boat. They began to pull us over the backwash current, and for a moment, the force of it almost tipped us over. Once we were free from the current, two fire fighters near the river bank threw us another rope. We let go of the first rope and were pulled off to the side of the river.

It wasn't until afterward, that we realized how very dangerous the situation had been. We heard stories of how almost all people that go over the dam, die from it. We would have been dead too, if it weren't for everyone involved in the rescue. Rachel and I would like to thank the Des Moines Fire Department and the people that called 911 for their kindness.

Hopefully, this incident will teach other boaters, amateur and experienced, to stay away from low-head dams.